For the track named after this character, see Alphys (Soundtrack).

Dr. Alphys (/ˈælfiːz/ AL-feez)[3] is a female, reptilian monster that lives in the lab in western Hotland. She is the incumbent Royal Scientist, a position she was awarded by Asgore after the disappearance of her predecessor.

Alphys is a yellow, reptilian monster of similar height to the protagonist. Her posture is somewhat hunched over. She has yellow scales, claws, and protruding teeth (which seem to vary between two and four depending which way she faces). Her feet have three toes while there are three fingers and a thumb on each of her hands. Her "hair" is designed into points facing the back of her head. She normally wears round glasses and a white lab coat. Her glasses do not cover her eyelashes. However, she wears a polka dot dress on her date with the protagonist.

Alphys is a nerdy, shy recluse with a fondness for human anime and manga. She has crushes on multiple characters (some mild[4][5], others more serious[6]), but struggles to communicate her feelings.

Alphys is filled with guilt and insecurities about herself and her accomplishments. After she accidentally created the Amalgamates while experimenting with determination, she told nobody[7] and became deeply depressed and remorseful.[8]

Before the events of Undertale, Undyne meets Alphys in the Garbage Dump and they become friends.[9] Alphys accidentally creates the Amalgamates through experimenting with Determination in hopes of saving monsters that have fallen down. The protagonist is able to encounter them in the True Lab later in the game.

Actually, wait, I have an idea
Let's be friends on UnderNet!

Alphys explains that a robot she created, Mettaton, wants to kill the protagonist.[12] Mettaton then bursts through the wall and forces the protagonist into a quiz show; Alphys helps the protagonist by signing the letter of the correct answer with her hands. Mettaton catches on after Alphys excitedly answers a question about her favorite video game,[13] and Mettaton embarrasses Alphys by asking the protagonist who they think Alphys has a crush on.

After Mettaton's quiz finishes and he flies away, Alphys offers her phone number to the protagonist. She notices that their cell phone is old and quickly upgrades it with features including texting, a key chain, links to two Dimensional Boxes, and access to the UnderNet.[14] Alphys explains these upgrades and rushes into her lab's "bathroom."

As the protagonist progresses through Hotland, Alphys frequently updates her UnderNet status.[15] She calls to help the protagonist with puzzles[16] but dislikes to give them the solutions outright.[17] Alphys stops posting status updates when she realizes that the protagonist has been reading them the whole time.[18]

After the protagonist delivers Undyne's Letter to Alphys, Alphys reluctantly goes on a date with the protagonist because she thinks that they wrote the letter.[31] She changes into a dress and takes the protagonist to the Garbage Dump for their date.

While there, the protagonist and Alphys roleplay to help Alphys open up to Undyne about her feelings.[32] Undyne overhears them talking about her and approaches. Alphys confesses that she was trying to impress Undyne by making her hobbies sound more scientific,[33] and Papyrus takes Alphys out for a lesson in self-confidence. Their training ends early and he sends her home.[34]

Come on, guys.
It's time for everyone to go home.

Alphys, speaking to the Amalgamates

When the protagonist returns to the lab, a note from Alphys lays on the ground in front of the "bathroom." The note directs the protagonist to the True Lab's entrance to discover the truth, in case they do not hear from her again.[35]

The protagonist learns about Alphys's Determination experiments in the True Lab via consoles on the walls that have her lab entries on them. She isolated determination from the six human SOULs and injected it into monsters who had "fallen down" in an attempt to extend the longevity of their SOULs after death. None of the monsters died, and they were well for a short time before they melted together.

Alphys's lab entries explain that monsters lack the physicality that humans have, and that this is why the monsters fused together; their bodies could not handle high concentrations of determination. She did not tell anyone about the Amalgamates and feared hurting everyone's feelings.[36]

She then leaves the lab and returns the Amalgamates to their families.

Alphys also joins Undyne in breaking up the fight between Asgore and the protagonist. Alphys is surprised to see two Boss Monsters,[39] and comforts Asgore after Toriel rejects his bid of friendship.[40] Mettaton prompts her and Undyne to kiss,[41] but Toriel interrupts them from doing so.

Alphys questions how Papyrus knew to call everyone to New Home,[42] and appears alarmed when Papyrus informs her that "a tiny flower helped [him]."

After Flowey ensnares the protagonist's friends, Alphys encourages the protagonist by stating her faith in them.[43] Flowey absorbs her SOUL along with the SOULs of every monster in the Underground.

Alphys appears as a Lost Soul during Asriel Dreemurr's battle.

After Alphys regains consciousness, she remembers little about what happened. She tells Asgore and Toriel about her failed experimentation; Toriel fires her.[44]

After the protagonist wakes up, she discusses her plans to watch anime when they leave for the Surface.[45] She also helps explain what anime is to Asgore, and asks for Frisk's help in doing so.[46] Alphys tries to show Asgore anime on her phone but accidentally shows him a picture of robots kissing.[47]

On the Surface, Alphys joins Undyne, who leaves to check on Papyrus. In the True Pacifist Ending Credits, Alphys relaxes on the beach with Undyne, Lesser Dog, Greater Dog, the Nice Cream Guy, and Onionsan. Undyne kisses her on the cheek, and she faints.

Alphys told me that she would watch me fight you...
And if anything went wrong, she would... evacuate everyone.
By now she’s called ASGORE and told him to absorb the 6 human SOULs.
And with that power...
This world will live on...!

After Undyne calls her, Alphys evacuates monsters in Hotland to the True Lab.[48] However, a few monsters remain, including Muffet and Burgerpants. She does not confront the protagonist directly.[49]

Before the events of Undertale, Mettaton (as a ghost) started a Human Fanclub. The only person who joined was Alphys,[50] who showed Mettaton designs of a robot she wanted to build for him.

Alphys worries that Mettaton will leave her behind after she finishes his body.[51] She cares deeply about Mettaton, and would not know what to do if he was gone.[27]

Alphys disappears in Neutral Route endings where the protagonist killed either Mettaton or Undyne;[52][53] it is hinted that she may have committed suicide.

Alphys has a crush on Undyne, but Alphys fears Undyne finding out the truth if she confesses her feelings. Alphys tries to impress Undyne because she does not want Undyne to think that she is a nerdy loser.[54] She also names variables after Undyne, writes her name in the margins of her notes, and writes fictions about them sharing a domestic life.[55]

Together, they hang out at Alphys's lab, where Alphys makes "chilly pink stuff" for Undyne.[57] Alphys also helped Undyne create some of Waterfall's puzzles.[58]

Guiding you has made me feel...
A lot better about myself.
So... thanks for letting me help you.

Alphys admires and supports the protagonist as they travel through the Underground. She watches them via hidden cameras from the moment they leave the Ruins. She attempts to insert herself into the protagonist's journey by creating obstacles in Hotland, but Mettaton later reveals that this was just an attempt to make herself feel better.

If the protagonist aborts the Genocide Route in Hotland, however, Alphys holds no positive feelings for the protagonist and says that she should have killed them when she had the chance.[60]

Alphys works for Asgore as the Royal Scientist. She lies to Asgore about creating a SOUL and presents Mettaton as proof of her achievement in an attempt to impress Asgore.[4]

She tries to do what Asgore asks of her, which leads to the failure of the determination experiments.

Alphys has a crush on Asgore and sometimes refers to him as "Mr. Dreamy." In the epilogue, Alphys comments that she has moved on from Asgore, and adds that she thinks Asgore and Toriel are a cute couple.[61]

Alphys did not know about Toriel until Alphys met her while interrupting Asgore's fight with the protagonist. Even though Toriel fires her as Royal Scientist, Alphys easily befriends Toriel. Alphys also finds her attractive.

When Toriel questions how anyone could flirt with her, Alphys laughs hysterically.[62] This is a likely reference to the positive fan reception of Toriel after the demo. Alphys also expresses her love of the "Tori and Gorey" ship, adding that she may write a lot of fanfiction about it.[63]

Alphys used to live on their street.[64] She was like a big sister to them[65] and took them on trips to the Garbage Dump to find cool junk. They reveal that Alphys made Mettaton to impress Asgore,[66] and add that no one has seen Alphys recently.[67]

Alphys evacuates Bratty and Catty on the Genocide Route.[68] 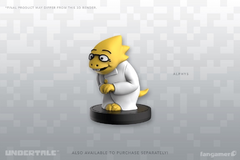