Living With Their Families, Thinking About Sticks

Living With Their Families

Everyone that had fallen down... ... has woken up. They're all walking around and talking like nothing is wrong. I thought they were goners...?

Alphys in ENTRY NUMBER 14 of the True Lab

The Amalgamates are a group of monsters brought back from being "fallen down" by Alphys. She injected them with Determination during an experiment to harness the power of SOULs, and to find a way to break the barrier and, thus, escape the Underground. Unfortunately, since monster bodies do not have enough physical matter to handle Determination, the magic that composed them lost cohesion, and they fused together into strange and horrifying creatures, with somewhat paranormal abilities.

Amalgamates resemble pieces of different monsters, like Froggits or Vegetoids (excluding Memoryhead, who does not resemble any known monster). Their appearances vary, depending on the monsters that compose them. For example, Endogeny appears to be a canine amalgamate because it is composed of many different dogs. Their battle sprites also vary from their overworld sprites; Snowdrake's Mother, for example, is unrecognizable in the overworld.

Many Amalgamates appear to have regressed to a partial bestial state, and attack the protagonist in the belief they have food while exploring the True Lab (or the fact that they did have food had they bought Popato Chisps from the vending machine). Despite this, the protagonist can get them to remember their old lives through battle, which allows them to be spared because they still retain their SOULs.

Before they fused together, the Amalgamates had a brief time where they lived like normal, and during this period, Alphys had promised their families she would return them. Once they fused, however, she became horrified and ashamed of her failure, confining them inside the True Lab.

The Amalgamates are implied to be discovered by the monsters in the Alphys Ending of the Neutral Route, where Alphys evacuates many monsters and survives to rule over the Underground.

An unnamed Amalgamate can tuck the protagonist into bed, should they decide to lay down in it and remain still for long enough. The Amalgamate then pats the protagonist on the head and disappears. It is possible that this Amalgamate is the same one inside of the bathtub, due to their similar shape. It is also possible that this is the "shape of a man" that can be seen in the fog of the refrigerator room. Indeed, the sprite name for this being is "spr_watchingman."

At the end of the True Pacifist Route, Alphys reunites the Amalgamates with their families, all of which are happy to see their loved ones again, despite their bizarre new appearances.

None of the Amalgamates can be successfully killed; all battles with them end peacefully or in a Game Over. This may be due to the protagonist's lack of harmful intent (as they are only accessible in the True Pacifist Route), or because of the Amalgamates' unusual abilities and determination.

If the protagonist attempts to hit an Amalgamate, red text appears above it as a replacement for normal damage and quickly cycles through the following statements:

The Amalgamates take no damage, and their HP increases after being attacked, the bar even leaving the Bullet Board. The exception is Snowdrake's Mother, who can take damage. Her HP is however completely restored in the next turn if attacked again.

When spared, they disappear in their own way instead of being grayed out like most monsters.

Amalgamate in the bathtub 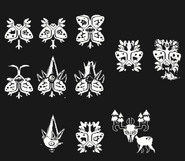 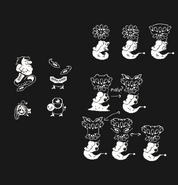 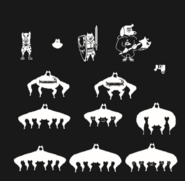 Concept sprite sheet for "Everyman", who would turn up on occasion