Believes in the Almighty Stick

Has His Own Seeing Eye Dog

Did something move? Was it my imagination? I can only see moving things. If something WAS moving... For example, a human... I'll make sure it NEVER moves again!

Doggo appears to be a bipedal dog monster. He wears a cotton-candy-pink muscle shirt with a picture of a dog on the front, a ninja-like mask, and leopard-print stretch pants. He also has a brown belt, and white tail. His lower paws appear to be bare. He dual wields short swords similar to the typical King playing card.

THE STATION OF DOGGO.
HE HAS THE AMAZING POWER TO SEE THINGS WHEN THEY MOVE.

Doggo's most notable feature is his inability to see stationary objects; he can only sense things that are moving, and he dislikes things and people that appear or transport themselves without physically moving (such as Sans). He seems to be occasionally unsure of himself and, if he sees something, checks to see if it moves again.

His in-battle description notes that his hobbies include "squirrels," which refers to a common dog's habit of chasing squirrels. He enjoys being pet by the protagonist, which can compromise his job as a sentry. It is hinted that Doggo smokes dog-treats similar to the conventional cigarette.

If the protagonist kills Doggo and spares Dogamy and Dogaressa, interacting with Dogaressa prompts her to ask, "Where's Doggo? I hope he didn't get lost again."

If the protagonist kills all other dog enemies, Doggo assumes that his friends are playing a prank on him by not moving.

In the True Pacifist Route epilogue, Doggo stands outside of the Snowdin Library with his family. He expresses happiness that he can always see Endogeny; this is because the Amalgamate constantly vibrates and moves. The True Pacifist Ending Credits lists Doggo as having his own seeing-eye dog, something typical of people suffering from issues that hinder eyesight.

Doggo's battle is the same on every route. However, as the protagonist approaches, Doggo shivers involuntarily even though he cannot "see" them.

If the protagonist gets hit by the blue attack after meeting Doggo’s spare conditions, he is no longer able to be spared.

Doggo appreciates Endogeny's company. Since Endogeny is a perpetually moving amalgamation, Doggo can always see them.

Doggo plays table games with Dogamy and Dogaressa at Grillby's. They sometimes prank Doggo by taking advantage of his inability to see non-moving things. Despite this, Doggo hangs out with them, and Dogaressa expresses concern when Doggo does not show up to play card games.

Doggo's official tarot card as the Two of Swords. 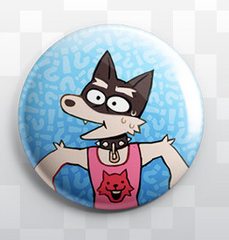