View source
watch 02:19
Wiki Targeted (Games)
Do you like this video?
Play Sound

Plot Mechanic
Golden Flowers are a type of flower that is a recurring symbol in Undertale.

Golden Flowers have corollas with five to six yellow petals. They grow on individual stems and appear to grow in patches as well. Golden Flowers are indigenous to the Surface[1] and can easily adapt to new environments, such as the Garbage Dump. Their sticky seeds helped them to be brought to and spread throughout the Underground.[2] They can be used to make tea.[3]

A prominent Golden Flower is Flowey. Alphys experimented by injecting determination into many vessels, Golden Flowers being one of them.[2] Alphys considered the vessels to be a failure.[2] After the monsters that were injected with determination woke up, Alphys sent the Golden Flower vessel back to Asgore, who most likely replanted it into his garden.[4] Once the monsters began to melt together, Alphys rushed to find the vessel only to find that it had disappeared.[5] The vessel, which was filled with determination, absorbed Asriel's essence from his dust in the flowerbed and became sentient. This is implied to be Flowey, as Flowey mentions how he woke up as a flower in the same garden where that flower grew.[6]

In a Neutral Route, monsters narrate the story of the first human and Asriel that occurred before the start of Undertale. A trio of Vegetoids say that the first human's last wish was to see the flowers from their village; they may be talking about the Golden Flowers seen throughout the Underground. 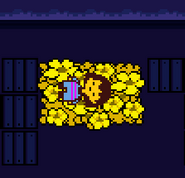 At the Garbage Dump

Table of Golden Flowers found in the True Lab

Golden Flowers in the Throne Room