View source
watch 02:52
Roblox: DeepWoken - The Loop
Do you like this video?
Play Sound

It's so excited that it thinks fighting is just play.

Excited by Life's Changes
Greater Dog is a guard dog and a miniboss encountered in Snowdin Forest. It can be later found as an NPC in Grillby's when the protagonist spares it in battle. It is a member of the Royal Guard.

Greater Dog's fur is wholly white, and it wears mantle-gray armor adorned at the wrists with apparently functional dog faces, much like the spear weapon it holds during battle. However, Greater Dog itself only fills the smallest neck portion and the tail area of the armor while controlling the rest of the suit through unknown means. Notably, when it jumps out of the suit, its "hands" seem to withdraw into the armor and don't reappear when it hops back in backwards.

Greater Dog is incredibly affectionate and constantly seeks attention; Dogamy even warns the protagonist of facing the full brunt of Greater Dog's playful attitude if they are not careful of where they sit down in Grillby's bar.

It sits with most of the other dog characters in Grillby's when it is not on sentry duty and appears to be unable to say much more than a sound effect while making a pleased expression (though this expression becomes a frown if both Doggo and the Dogi have been killed).

Greater Dog appears in the True Pacifist Route epilogue outside the Snowdin library with most of the other dog characters, playing happily with Endogeny, making its trademark facial expression and sound effect (which the Endogeny seems to now share).

A scene shown during the credits shows it hiding within a poff of sand on a beach with Undyne and Alphys, much like it did with the snow before battling it, while Lesser Dog performs a similarly familiar pastime nearby. Its yellow text in the credits also lists it as being excited by life's changes. 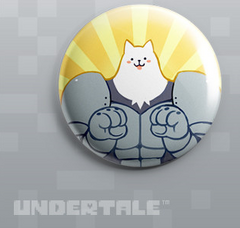