Wields a stone dogger made of pomer-granite.

Found A Loving Owner
Lesser Dog is a miniboss the protagonist encounters in Snowdin Forest. It is later found as an NPC in Grillby's. It is a member of the Royal Guard.

Lesser Dog's fur is a light cream color, and its red tongue appears to be perpetually lolling out of its mouth. It wears gray, presumably metal armor with a darker gray band around the waist area. It holds a sword and a shield with the Delta Rune.

Like several other dog characters, Lesser Dog becomes overexcited from physical attention. It is capable of extending its neck at a seemingly limitless rate when stimulated by being pet.

Lesser Dog appears to enjoy spending its time off sentry duty by playing card games (namely, poker and go fish) against itself at Grillby's. When interacting with it at this time, the text mentions how it appears to be losing.

While waiting around its sentry post in Snowdin Forest, Lesser Dog spends a lot of its time making snowdogs, mostly with necks in similar lengths to its own. A faun monster standing near the post notes that it seems to get overexcited in the construction of the figures and never finishes them. It may be that Lesser Dog is able to achieve focus by being pet, as after being pet by the protagonist its statues become more complete. The more pets it receives, the more statues Lesser Dog creates around its sentry post, until they all become broken statues of its very long neck when it is pet enough times or has the Stick thrown at it. In this case, the faun states that a dog came by full of excitement and started building sculptures, but its neck kept growing and it kept adding snow to the sculptures until they broke. On the flip side, if Lesser Dog is killed, its sentry post is accompanied only by a pile of formless mushy snow.

In the playable epilogue for the True Pacifist Route, Lesser Dog has, apparently, finally won a game of poker against itself, sitting in Grillby's bar - the only dog character not to be outside the Snowdin Library playing with its family member(s) Endogeny. In the True Pacifist Ending Credits, it can be seen building sand dogs on the beach.

It is very easy to spare Lesser Dog.

Lesser Dog's official tarot card as the Page of Swords[1] 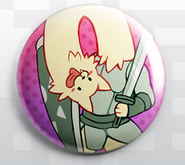