View source
watch 02:46
The Quarry - The Loop
Do you like this video?
Play Sound

If she invites you to her parlor, excuse yourself.

Variable (depending on how much money she receives.)

Spider Success With a New Bakery

Don't look so blue, my deary~ ... I think purple is a better look on you! Ahuhuhu~

Muffet, when changing the color of the protagonist's SOUL to purple.

Hotland
Muffet is a miniboss the protagonist encounters in Hotland. She runs a bake sale, being very angry at passers-by who do not purchase anything from it despite selling overpriced items 9999 gold. She was a bought-in character during the Kickstarter for the game.

Muffet is an anthropomorphic spider monster with periwinkle or lavender skin, five eyes, six arms, and two legs. She wears red rompers with buttons in the front, a red ribbon across her chest, as well as twin pigtails in her hair. She is also shown holding two teacups with her top pair of hands and two teapots with her middle pair.

Her pet accomplice appears to be a giant cupcake with a face on the frosting part as well as spider legs sticking out of the sides.

Muffet is often portrayed as a greedy, stingy, intimidating and somehow hypocritical monster, although having a courteous and sweet way of speaking. Even so, she seems to have a quite malicious aspect on her personality whenever she is crossed, something that occasionally triggers her fight. During her battle, she also has a tendency to cite morbid or inappropriate things, such as commenting on the protagonist's possible fate in being used to make food.

Muffet appears to be the leader of the spiders in the Underground. She also runs her own bake sale in Hotland, with the purpose of raising funds to rescue the spiders trapped in the Ruins, as they cannot make it past Snowdin's cold weather. After running into her web, Muffet fights the protagonist.

If the protagonist decides to kill her instead, a spider crawls and places a flower in the place where Muffet died.

During the battle, Muffet speaks about how she was warned by someone about the protagonist's arrival, and she was offered much money for the protagonist's SOUL. She also explains that the money would help to finally reunite the spider clans. When the protagonist fights Mettaton later on, he claims responsibility for the offer.

Muffet does not appear in her bake sale. When the protagonist encounters her, she laments that she cannot use them in her recipes because she considers them rotten, but states that spoiled ingredients can always be discarded. During the battle, Muffet first says that the protagonist is scaring away all her customers, thus not letting them leave. She goes on to talk about how Alphys tried to get her to evacuate Hotland because of the danger posed by the protagonist, but she refused. She regrets that she did not capture Alphys, for she says she would have made "a juicy donut."

She eventually lets the protagonist go, as they have not hurt any spiders (spiders are not encountered as an enemy, except Muffet herself). However, she may crash the game after the "dinner" attack as the game tries to load an attack that does not exist. (This may be related to the use of Debug Mode, and the "skip attack" shortcut within.) Purchasing an item from the Hotland bake sale does not abort the Genocide Route. Muffet will mention that the protagonist donated, but she will still be suspicious of them and attack. If she is spared, the Genocide Route will be aborted. Once she is spared, Muffet does not appear again as NPC. 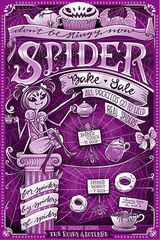