I WILL BE THE ONE!
I MUST BE THE ONE!
I WILL CAPTURE A HUMAN!
THEN, I, THE GREAT PAPYRUS...
WILL GET ALL THE THINGS I UTTERLY DESERVE!

Papyrus discussing his plans with Sans

Papyrus (/pəˈpaɪrəs/ pə-PY-rəs) is the brother of Sans and a major character in Undertale. His main motive is to capture a human so he can become a member of the Royal Guard, and finally have friends and popularity.

Papyrus is a tall, perhaps anatomically inaccurate skeleton, with a skull more vertical and geometric than his brother. Being skeletal, many of his expressions incorporate a toothy grin. His eyes resemble vertical slits; his skeletal pseudo-brows form most of his expressions. He has eyeballs which show at times when he is experiencing strong emotions.

For most of his in-game appearances, he wears his "battle body," an outfit that he created for a costume party.[1] It consists of a white chest plate with gold trim, coquelicot gloves with a golden trim, blue briefs with a golden belt, and knee-high coquelicot boots. A symbol that resembles that of Starman from the MOTHER series adorns the chestplate. He also wears a short, orange-red cape.

Halfway through the date/hangout with Papyrus, he changes into his "secret style": a backward baseball cap, a t-shirt that reads "Cool Dude," small shorts with buttons, gloves with striped trim, knee-high socks, and sneakers. He also wears basketballs on his shoulders, likely Mettaton's MTT-Brand FashionBall.[2]

During the "date" with Alphys, Papyrus arrives wearing a sweatband, shorts, and a t-shirt that reads "JOGBOY," with hearts on the pauldrons. He still wears his boots, gloves, and scarf.

Papyrus is a flamboyant skeleton who presents a confident, charismatic image of himself. He works hard and, despite his brash personality, is kind at heart. He is optimistic and innocent even when the protagonist beheads him in the Genocide Route.[3] He is also occasionally oblivious and nonobservant,[4] but can be cunning at times, as seen when he uses reverse psychology to trick Undyne into befriending the protagonist.[5]

Papyrus believes in others just as much as he believes in himself. He has so much faith in his abilities that he waited outside of Undyne's house all night and begged her to accept him into the Royal Guard. Seeing his persistence, Undyne offered to train him, but instead gave him cooking lessons.[6]

He cooks spaghetti in his spare time, though many characters seem to think that he is not very good at it.[7][8] One of the reasons for this is because Papyrus never ate spaghetti himself to complete the chef's guidebook to cooking by tasting their creation before serving. He, therefore, cooks spaghetti only because everyone else loves to eat it, indicating he does not play favorites.[9] He loves puzzles and japes, as shown in the numerous puzzles he prepares for the protagonist as well as his collection of "complex tomes about puzzle creation." Though advanced puzzles may seem cerebral, Papyrus also enjoys children's books[10] and is somewhat childish with the decoration of his room. He also collects action figures.[11]

Papyrus also watches Mettaton's TV shows,[12] and admires Mettaton so much that he would move to Hotland,[13] a region that he hates.[14]

Sometime before the events of Undertale, Papyrus and his brother showed up one day in Snowdin and asserted themselves. Sometime after that, Papyrus became friends with Undyne and began training with her.

WHAT ARE YOU LOOKING AT!?
THIS WAS ANOTHER DECISIVE VICTORY FOR PAPYRUS!!

Papyrus after The Gauntlet of Deadly Terror

Papyrus first appears in Snowdin Forest, where he arrives to check up on his brother. After learning that Sans had not made any progress over eight solid days, Papyrus, ignorant of the human hiding nearby, berates Sans for not recalibrating his puzzles.[15] He then delivers a long tirade to Sans that he will capture a human and become popular. Further in the forest, Papyrus meets the protagonist for the first time, though he initially confuses them for a rock.[16]

Papyrus attempts to antagonize the protagonist with puzzles and japes, but he eventually warms up to them. He almost refuses to fight the protagonist out of pity.[17] Though Papyrus initiates an encounter, he never kills the protagonist and instead places them in his shed if he reduces their HP to one. The protagonist can easily escape his shed since the door is always unlocked from the inside, but after taking the protagonist to the shed for the second time and beyond that, Papyrus tries to make it more appealing for them to stay by cutting up pieces of a hot dog and adding it to the bowl of kibbel for them to eat.

Ultimately deciding that the protagonist is friendly, Papyrus lets them continue into Waterfall, advises them on how to exit the Underground,[18] and offers either a hangout or a date back at his house depending on if the protagonist flirted with him during his battle.

Returning to Papyrus's home after Papyrus's fight initiates the befriending event. During the befriending event, the player can press [C] to open the Dating/Friendship HUD, which consists of a clock, a radar that tracks the Annoying Dog, a level of crime graph, a bar with "REEL IT IN!" above it, a population chart, and an egg. The date shown on the clock matches the day on the player's computer, and the graphic next to it changes accordingly based on the time of day the player's computer provides. If the player opens the HUD before Papyrus reads from the dating/hangout book to open the HUD, he realizes it has already been done. However, if they do not open the HUD after a certain period of time, Papyrus moves on and the HUD is not present for the befriending event.

Papyrus dresses in his "secret style" and hides a special gift under his hat for the protagonist. Ultimately, Papyrus decides that the protagonist cares too much about him for their own good,[19] and sends them back on their way with his phone number, which the protagonist can call at any time to hear his opinions about the room that they are in.

When the protagonist makes their way into Waterfall, Papyrus attempts to sway Undyne from killing them; Undyne refuses to yield, however, and Papyrus finds himself obligated to help her.[20] He calls the protagonist and asks them to confirm what they are currently wearing. Papyrus is loyal to both Undyne and the protagonist by employing a ruse that backfires regardless of what the protagonist does.[21]

Papyrus calls the protagonist while Undyne is chasing them and says that they should all hang out. If befriended, Papyrus is waiting outside her house and can be talked to as early as during the chase.[22] After the protagonist chooses whether or not to give Undyne water in Hotland, they can go to Undyne's house, and Papyrus offers dialogue based on the protagonist's actions after his call.[23][24][25] If the protagonist gained no EXP, Papyrus gives the option to hang out with her.[26] He flees from the hangout early on, after using reverse psychology to get Undyne to befriend the protagonist.

Befriending Papyrus is necessary to finish the True Pacifist Route. Flowey guides him to call all the protagonist's friends to New Home.[27]

Before Asriel's boss battle, Papyrus rushes to intervene with the battle between Asgore and the protagonist.[28] He then meets Toriel for the first time and becomes annoyed once she tells him a pun.[29]

Flowey then restrains Papyrus and the rest of the monsters present with vines. Papyrus defends the protagonist from Flowey's bullets and states his faith in the protagonist.

Papyrus discovers that there is no need for the Royal Guard anymore and proclaims that this is "THE WORST POSSIBLE ENDING." He also comments that Toriel is a "HUGE DORK."[30]

In the credits, it seems many of Papyrus's dreams have come true: he drives a red car along a highway, something he has always wanted to do. Later on, Asgore is shown trimming a hedge in the shape of Papyrus's face, something that Papyrus wished would happen once he became a famous royal guardsman.[31]

FIRST: YOU'RE A FREAKING WEIRDO!
NOT ONLY DO YOU NOT LIKE PUZZLES.
BUT THE WAY YOU SHAMBLE ABOUT FROM PLACE TO PLACE...
THE WAY YOUR HANDS ARE ALWAYS COVERED IN DUSTY POWDER.
IT FEELS...
LIKE YOUR LIFE IS GOING DOWN A DANGEROUS PATH.

Papyrus confronting the protagonist on the Genocide Route

In the Genocide Route, Papyrus pulls much of the same antics that he does in a Neutral/Pacifist route, except often cites the protagonist's unwillingness to complete his puzzles.[32] He remains oblivious to the protagonist's motives until their battle, where he instantly spares them, wishing to guide the protagonist on a better path and be friends. The protagonist can then spare or kill Papyrus.

The protagonist remains friends with him throughout the game and gains the ability to call him on the cell phone almost anywhere.

Sans is Papyrus's brother, and though Papyrus often chastises him for being lazy and detests his many skeleton puns dropped throughout the game, the two of them care about each other a lot. Papyrus often cleans up after Sans and prompted him to get a job as a sentry.[35]

Papyrus is upset that Sans naps so much, mostly through the night,[36] and mentions that it's impressive how much slacking off his brother can do.[37] Even though Sans reads Papyrus bedtime stories and is the sole provider in the skeleton household, Papyrus takes care of his brother and wonders what Sans would do without such a "cool guy" watching over him. Together, they made Papyrus's "battle body" as well as his cardboard sentry station in Snowdin Forest.[38]

Papyrus also recognizes that Sans is secretive[39] and kind of weird.[40]

Papyrus and Undyne are close friends. After Papyrus asked to join the Royal Guard, Undyne gave him cooking lessons, and they bonded. Because Undyne does not have the heart to tell Papyrus that she will never let him join the Royal Guard, Papyrus continues trying to impress her by capturing a human. Sometimes Undyne grosses Papyrus out,[41] but Papyrus looks up to her as a role model. Papyrus is also oblivious at times when Undyne is angry at him,[42] though he is keen enough to know to present befriending the protagonist as a challenge to her.

Papyrus sees Flowey as a good friend because Flowey offers him predictions, flattery, advice, and encouragement. Papyrus also borrows some of Flowey's dialogue characteristics,[43] and Flowey guides Papyrus to call the protagonist's friends to interrupt Asgore's battle with the protagonist.

Papyrus spins away after presenting the Multicolor Tile Puzzle 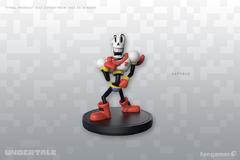 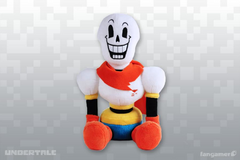