Tra la la. I am the riverman. Or am I the riverwoman...? It doesn't really matter. I love to ride in my boat. Would you care to join me?

First interaction with the River Person

The River Person is a hooded figure who provides transportation services to Snowdin, Waterfall, and Hotland on their wooden boat for the Underground. The protagonist can request a ride to any of the locations above if they reach Hotland on any route.

During the trip, the River Person has a list of messages they can say at random, often being a hint to a secret or an allusion to something in the game, or just something cute. One hint—the hint to finding Temmie Village—is specifically scripted to occur.

With No Known Special Meanings

With Known or Possible Meanings 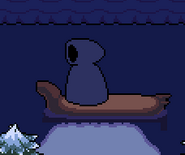 The River Person and their boat.

Their boat with the dog face.