Two lovers staring over the edge of the cauldron of hell.

Use Your Imagination
The Royal Guards are a mini-boss duo the protagonist encounters in the upper levels of Hotland. Shown by their names, they are members of the Royal Guard. Royal Guard 01 experiences romantic attraction towards Royal Guard 02, as portrayed in the dialogues during the battle. 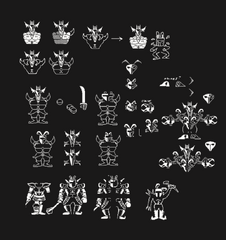 Sprite sheet from the UNDERTALE art book depicting different sprite concepts for the characters, and even some concepts for 03 and 04.