For the track named after this character, see Undyne (Soundtrack).

The heroine that NEVER gives up.

SCREW IT!
WHY SHOULD I TELL THAT STORY
WHEN YOU'RE ABOUT TO DIE!?!
NGAAAAAHHHHHHHHHHHHHHHHH!

Undyne before her battle

Undyne (/ˈʌnˌdaɪn/ UN-dyne),[1] known as StrongFish91 on the UnderNet, is a fish-like monster that leads the Royal Guard. Clad in her full suit of armor, she pursues the protagonist through the entirety of Waterfall and is frequently evaded or inadvertently thwarted by Monster Kid.

Undyne is a piscine, anthropomorphic monster. She has blue scales and a long red ponytail. She has red and blue fins on the sides of her head, and a pair of sharp, yellow, protruding teeth. She wears a red eye shadow and has an eyepatch on her left eye. She also wears a black tank top and jeans, but debuts in armor varying in light and dark shades of gray. Her eyes have black vertical pupils and yellow sclera. Undyne has no nose.

During the date with Alphys, Undyne wears a white turtleneck under a black leather jacket, a scarf around her neck, pants, lipstick, a light-colored eye patch, and lets some of her hair down.

Whenever she persists through Determination after her HP reduces to zero, her pupils turn white, and her sclera turns black. She no longer has an eyepatch, and her newly revealed empty eye socket emits a flashing light in the shape of a spear. Her hair spikes at the ends like a trident and her fin rays become more rigid and pointy. She also appears to have donned a new set of darker colored armor with souls/hearts on her chestplate and new white gloves, which have spikes protruding from their backside, accompanied by boots with pointed toes.

Undyne is passionate about everything that she does. She acts quickly on her ideas and is steadfast in her beliefs.[2] Though she wants to defeat the protagonist, she also tries to be fair and offers an explanation of how Green Mode works. Asgore taught her the value of pacifism,[3] which is why Undyne sees the protagonist as "a wimpy loser with a big heart." When the protagonist first encounters her, she fights to further Asgore's plan of collecting seven human SOULs but, if the protagonist shows mercy, Undyne just as quickly defends them from Asgore.

She loves to help others and mentors Shyren and Papyrus in various skills. Undyne dislikes puzzles, loves japes,[4] and enjoys anime, an affinity she shares with her romantic interest, Alphys. Since Alphys told Undyne that anime is actually human history, Undyne regards human history as exciting and cool.[5]

Out of all encountered monsters, Undyne possesses the most Determination. She melts before her death, implying that her body cannot handle the amount of Determination she has.

The protagonist initially encounters Undyne after entering Waterfall, where Undyne stands on top of a ledge. If alive, Papyrus approaches her and delivers a report on the status of the human, and then attempts to convince her not to harm them. After Papyrus leaves, the protagonist can continue, but the grass rustling alerts Undyne to their presence. She scopes out the grass for a moment whilst the track Undyne plays, before retreating.

BUT NOW??? I DON'T CARE! I'M NOT YOUR FREAKING KINDERGARTEN TEACHER!

After this, Undyne confronts the protagonist and stands atop a crag while giving a monologue that she has practiced many times before.[6] However, she cuts the monologue short because she forgot the rest of it[7] and launches head-on into battle.

I'll make you like me so much... Your WHOLE LIFE will revolve around me!! FUHUHUHUHU!!!

Undyne during her hangout with the protagonist.

Because her house scorched, Undyne moves into Papyrus and Sans's House.

After the protagonist completes a Neutral Route, they can backtrack from the CORE into the MTT Resort, and Undyne will call them to ask for a favor. In Snowdin Town, Undyne gives them a letter that she asks them to take to Alphys in Hotland. The protagonist gives Alphys the letter, but she mistakes it as being a love letter from the protagonist because it has no signature.[9] Alphys reluctantly goes on a date to the Garbage Dump with the protagonist. Alphys hides behind a trash can upon seeing Undyne, who then arrives and sees the protagonist at the dump and asks for her letter back; she wants to give it to Alphys herself. After Undyne walks away, Alphys expresses regret about her lying to Undyne, and the protagonist suggests a roleplay to help Alphys express her feelings.[10] Undyne interrupts the roleplay, and Alphys tells her about her romantic interest. Undyne reciprocates these feelings and tosses Alphys into the trashcan.[11]

Undyne says that Alphys needs to work on her self-image,[12] and Papyrus leaves with Alphys to help with her emotional transformation. After the two leave, Undyne asks the protagonist if anime is real or not and thanks them for helping with Alphys.

Later on, Undyne interrupts Asgore's encounter with the protagonist and demands that they befriend one another. Prompted by Mettaton, Alphys and Undyne almost kiss before Flowey's ambush, but Toriel chastises them for kissing in front of a child. Flowey ensnares the protagonist's friends with a Photoshop Flowey vine, and Undyne protects them from incoming attacks from Flowey. He then absorbs the six human SOULs and most of the SOULs of the monsters in the Underground.

During the battle against Asriel, Undyne appears as one of the Lost Souls.

When the protagonist talks to Undyne in the epilogue, Undyne states that she is glad that she lost to the protagonist and then resolves to watch anime with Alphys. The Royal Guard is disbanded. Toriel also texts the protagonist that Undyne was able to lift Asgore, Sans, Papyrus, Alphys, and Toriel herself at once, but was uncertain as to how to put them down.

On the surface, Undyne pursues Papyrus after he runs off to meet more humans. In the True Pacifist Ending Credits, Undyne kisses Alphys on her left cheek and laughs when she faints in embarrassment. She then punches the sidewalk beside her while laughing, causing it to crack.

You're gonna have to try a little harder than THAT.

After the protagonist attacks the Monster Kid, Undyne protects them and takes the blow instead. Even though her HP reduces to zero, Undyne holds on through Determination and reforms into Undyne the Undying.[13] If the protagonist defeats her, she tells them that Alphys was watching their battle and has evacuated the rest of the monsters to safety.[14] Undyne begins melting due to her Determination and then turns to dust.

Alphys and Undyne love one another. Undyne first met Alphys in the Garbage Dump, listening for hours about where she thought the abyss there led. The two became close friends soon after, with Alphys introducing her to anime at some point, although Alphys told her that they were history biopics about humans. They hang out often, and Alphys uses the seagrass throughout Waterfall to make a special frosty treat for Undyne.[15] Alphys and Undyne also worked together to create some of the puzzles in Waterfall.[16] At some point Undyne fell in love with Alphys due to her confidence in what she liked and her work but didn't know how to express this. She apparently called her once just to ask her what the weather was like, even though the Underground has no weather. She would also constantly write letters expressing her feelings but she'd always change her mind when she went to deliver them and go back to write another one.[17]

She quit her job as head of the Royal Guard at the end of the Family Ending to be Alphys's lab assistant, where she apparently caused a lot of explosions.[18]

In the True Pacifist Route, Undyne calls the protagonist to have them deliver one of her letters to Alphys but quickly changes her mind after changing into some casual clothes. She discovers them in the dump, having a pretend date due to Alphys thinking the letter was from the protagonist, where she hears Alphys saying she loves her. This leads to a conversation where Alphys confesses everything to her, which she mostly accepts, but she starts freaking out after Alphys leaves about the idea that anime is not real. She asks the protagonist if it is true, and if they confirm that it is, she becomes devastated but decides to put up a brave face for Alphys's sake. They nearly kiss while visiting the protagonist after the Asgore fight is interrupted, but Toriel interrupts them and tells them not to kiss in front of the protagonist. Undyne is seen kissing Alphys on the cheek on the beach during the credits and laughs when the latter faints.

Undyne thinks of Papyrus as a close friend. She is impressed by his persistence, but is concerned about his well-being and secretly does not want him to join the Royal Guard because she believes he is too kind to even fight.[19] As a result, she teaches him how to cook in hopes for him to defer from joining. Undyne sometimes enjoys messing with Papyrus,[20] but she often forgets that he usually takes things literally.[21] She becomes heartbroken and infuriated if the protagonist kills Papyrus during a Neutral/Genocide Route.

Undyne initially despises the protagonist and believes that they would be more useful dead than alive.[22] If the protagonist spares her and offers her water in Hotland, she begrudgingly befriends them if they have earned no EXP. Though Papyrus tricks Undyne into befriending the protagonist, she genuinely cares about them at the end of their hangout. However, if the protagonist betrays her by killing monsters after her hangout, she ends up hating them more than she would if they did not hang out with her at all.[23][24]

If the protagonist earned no EXP and befriended Undyne in a previous playthrough, she remembers them vaguely as a friend but brushes off the feeling before her battle.[25]

Even though Asgore is her boss, Undyne sees him as a friend and knows his favorite type of tea. When she was younger, Undyne challenged Asgore to a fight but could not land a single blow on him.[26] She was humiliated because he did not fight back and only dodged her attacks. Asgore then offered to train Undyne and eventually promoted her to head of the Royal Guard.

After Toriel refuses to "be friends again" with Asgore in the True Pacifist Route, Undyne sympathizes with him.[27]

Napstablook and Undyne live in the same neighborhood, and Napstablook is intimidated by her.[28] She still tries to be a good neighbor to them. She seems concerned about them being alone after their cousin left and tells the protagonist to be nice to them.[29]

Undyne does not know that Mettaton is Napstablook's cousin. She has a distaste for him,[30] and she does not like his show.[31] Though she does acknowledge that she "admires his lifestyle."[30]

Undyne used to give piano lessons to Shyren,[32] but one day she stopped coming – presumably after her sister fell down.

Undyne appears to care for Monster Kid's safety. This can be seen when Undyne saves them after they fall off a cliff. This aspect appears more prominently in Genocide Route, where Undyne takes a fatal blow in their place. 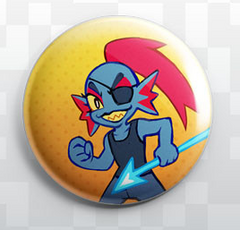 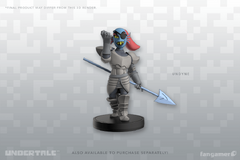