Serving Size: 1 Monster.
Not monitored by the USDA.

Popular Nutritionist
Vegetoid (/ˈvɛdʒɪˌtɔɪd/) is a species of monster encountered in the Ruins. Its Hard Mode counterpart is Parsnik.

Vegetoid appears to be a large carrot with a face that covers its entire front. Apparent by its overworld sprite, its color is also consistent to that of a carrot. Its expression is always that of a wide smile with overjoyed eyes.

Vegetoid's main purpose is to encourage the protagonist to eat their vegetables. It often says things supporting this, mainly "Eat Your Greens." 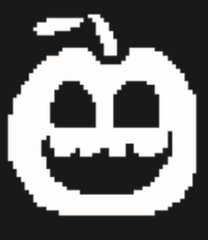