View source
watch 02:46
The Quarry - The Loop
Do you like this video?
Play Sound

Beware of the man who speaks in hands.

W. D. Gaster was the royal scientist before Alphys, responsible for creating the CORE. Gaster's Followers relay various explanations as to what happened to Gaster. One iteration says that he "fell into his creation," another says that "his experiments went wrong," and the last one says he "shattered across time and space." Characters such as the River Person and Gaster's Followers hint at his existence. Similar to Sans and Papyrus, he speaks in a typeface different from the other characters.

W. D. Gaster does not have an officially known form, but there are several rooms and unused assets found in Waterfall that point to what he may have looked like.

In Room 269 (room_mysteryman), a figure (spr_mysteryman) widely believed to be Gaster can be found. The figure is black and white with a distorted, cracked face. Unlike every other NPC, they have no collision physics, and interacting with them causes them to react in surprise and vanish while a sound effect plays.

This room can only be accessed when the game's fun value (which can be changed by editing file0 and undertale.ini) is set to 66. In this scenario, Room 268 (room_water_fakehallway), a hallway with a 10% chance to contain a gray door, appears between Room 94 (room_water_savepoint1) and Room 95 (room_water11), the rooms with the crystallized cheese and Sans's telescope, respectively. The door in this hallway leads to Room 269.

Upon attempting to call someone using the Cell Phone in either of these rooms, the default message "There's no response..." appears.

Room 123 (room_water_prebird) is a removed corridor with tall grass that is presumed to connect Room 99 (room_water_bird), where the bird that carries the protagonist over a disproportionately small gap is located, and Room 116 (room_water_friendlyhub), where the six-way fork in Waterfall is. The characters in this area mention that this corridor is a bug catching spot.

An unknown character on the left side of the tall grass mentions that "there is somebody with a creepy smile behind you." The unseen character presumably disappears after the dialogue is triggered. The character with the "creepy smile" is possibly the Mystery Man seen in Room 269 which may be Gaster, and the evidence supporting this theory lies within the word "smile" in the dialogue, as the track that plays in entry 17 is named mus_smile. However, it could also be Flowey (who follows the protagonist throughout the game), Sans, or even the fallen human.

Room 272 is black and has a ghostly figure (nicknamed "Redacted", as the file name for it is spr_redacted_a) in the middle of it that becomes less transparent as the protagonist approaches. If the protagonist attempts a conversation with the NPC, it returns "* [redacted]" in lowercase Wingdings, which implies that a conversation was planned here but was removed for security purposes.[1] Exiting Room 272 leads to the Sound Test Room, where the protagonist can listen to four songs including Gaster's Theme.

All but one of the songs can be played and switched amongst each other. Upon playing Gaster's Theme, the other three songs are unable to be played again even if the player tries to do so. After Gaster's Theme is concluded, the text "Thanks for your feedback! Be seeing you soon!" is displayed and either the game crashes, or the protagonist is put in the room with the fishing pole in Snowdin, suggesting this room was intended to be focused on Gaster.

To access this room and avoid the Annoying Dog error screens, a hexadecimal editor needs to be used to change the "Dogcheck" value.[2]

Inside the game's files are strings of text that implicate a stable was planned to be put into the game. There would be a trash can where a key can be found; if the key is brought to the horse stable, the same figure from Room 272 appears and says "* x" in Wingdings.

In Room 264 (room_gaster), the text below is displayed in uppercase Wingdings. This text is believed to be the seventeenth entry from the True Lab that cannot be accessed. This could, however, only be a red herring, since another entry number 17 also exists, written by Alphys and very obviously connected to the other entries accessible in the True Lab. It is worth noting that both Alphys's seventeenth entry and Room 264 are inaccessible in normal gameplay – Alphys's entry can only be found in the game's text files, and Gaster's entry is only accessible through SAVE manipulation or debug mode. Room 264 immediately follows the generator room in the True Lab.

Transliteration of the Wingdings text is as follows:

Once the message ends, the screen turns black for a second before the game closes. The audio that plays during the entry is labeled as "mus_smile" in the game files. This file can be sped up by 1000% to reveal Muffet's laugh, reversed, and then looped over.[3] An excerpt from the entry number 17 can also be found on a snapshot of deltarune.com/him.png from 2015.

"The Man who Speaks in Hands"

During one of the travels with River Person, they say "Beware of the man who speaks in hands." There is speculation that this alludes to Gaster since the typeface used in the entry number seventeen (room_gaster) uses hand symbols.

A similar line from the River Person is "Beware of the man who came from the other world." Considering the similarities it shares with the previous quote, it might either refer to Gaster or the monster So Sorry, whose check text reads "This creature is definitely in the wrong time and space!" as well as the file name of So Sorry's theme being mus_wrongworld.

There is some inconclusive evidence as to whether Goner Kid is actually related to Gaster. Like Gaster's followers, Goner Kid's sprite has minor differences compared to the monster their sprite is based on. Goner Kid's clothing has a blocky, checkerboard-like pattern, they have a bow or two horns/spines on one side, two lines behind their head, and their eyes have no pupils. However, unlike Gaster's followers, the protagonist's phone works if they attempt to use their cell phone while in the room, and Goner Kid never mentions Gaster's name.

Gaster's Followers are gray NPCs that are found near the elevators in Hotland when the fun variable is at a certain value. They all resemble certain NPCs in the game but with a few minor differences.

If the protagonist tries to call Papyrus (or Papyrus and Undyne) while in a room with a follower, they only get the line "The phone won't turn on." The protagonist can still attempt to reach Toriel over the phone. The phone works normally after leaving the room.

Goner Clam Girl, also known as Clam Goner, is a Waterfall NPC exclusive to the Nintendo Switch version of Undertale, where Clam Girl gets some new dialogue in the epilogue of the True Pacifist Route. At the final line of her dialogue, Clam Girl turns into Goner Clam Girl. She then disappears with the same sound effect as Mystery Man and Gaster Follower 2, which shows a possible connection to Gaster.

Sans is presumed to have a connection with W. D. Gaster due to the workshop behind his house and the name of his weapons used in the Genocide Route.

Goner Kid, the NPC that discusses alternate timelines, says, "An umbrella...? But it's not raining." This relates to one of Sans's leitmotifs "It's Raining Somewhere Else" which plays when he takes the protagonist out to dinner in the MTT Resort and in his workshop.

On the official Undertale Tumblr, is a post that includes the line "besides, it’s rude to talk about people that are listening, right?"[4] This quote is similar to a line from Gaster Follower 3.

Room 80 (room_tundra_sansbasement) is a workshop that has four drawers and a strange machine covered up with a curtain. One drawer contains a badge, and another contains a photo album with numerous people that the protagonist does not recognize. If the protagonist has encountered Clam Girl earlier in the route, interacting with the drawer causes a card to slip into the protagonist's view; it displays a poorly drawn picture of 3 people, with the words "don't forget" written on it. The other two drawers causes the protagonist to read the blueprint on the countertop, which is said to be written in unintelligible symbols or handwriting that could potentially be related to W. D. Gaster or Alphys, as she also writes in illegible handwriting, as shown in the note before entering the True Lab.[5]

The note written on the picture with three people is most likely from Sans; Unlike Papyrus, he does not write in his typeface, which can be seen when the protagonist reads the note on his treadmill.

In Room 264 in one of the parts of Gaster's version of Entry Number 17, he says, "What do you two think?" By "two," Gaster may be referring to Sans and Alphys, as it is hinted at the end of the True Pacifist Route that they had a past together and Gaster could be the missing link to where they possibly could have had a relationship.

The broken machine in the room has been said to be unfixable according to Toby Fox.[6] This means that the machine was never meant to be fixed, and if this was the creation Gaster fell in, then he is surely doomed to remain erased.

Additionally, Sans uses a weapon during his fight in the Genocide Route called a "Gaster Blaster," possibly indicating that Gaster developed the weapon. Another theory could be that it was a weapon specifically made to be used against Gaster if he was a boss in the game. 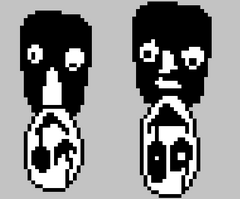 Mystery Man sprites upside down, before and after interaction.