For the track of the same name, see Waterfall (Soundtrack).

Waterfall, Quiet Water, Memory, Temmie Village, She's Playing Piano, Bird That Carries You Over A Disproportionately Small Gap, sans., Run!, Undyne, NGAHHH!!
Waterfall is the third area the protagonist encounters in the Underground. The area is accessible after the protagonist defeats Papyrus in a fight. The area follows Snowdin Forest and Snowdin Town, and precedes Hotland.

For the area's puzzles, see Waterfall/Puzzles.

After passing through rooms filled with Echo Flowers and mazes with lit paths, the protagonist fights Undyne. This battle leads to a chase scene into Hotland.

On the Genocide Route, the protagonist encounters Monster Kid and Undyne's spear attacks, but the puzzles are solved. Mad Dummy becomes corporeal and transforms into Glad Dummy.[2] Every Temmie has left Temmie Village except for the Temmie Shopkeeper and the Temmie that looks out from the wall. Monster Kid attempts to stop the protagonist, but once they retaliate, Undyne takes the fatal blow and returns as Undyne the Undying. If there are still monsters left right before fighting Undyne, "Strongly felt <amount> left. Shouldn't proceed yet." appears on the pathway to the bridge that Monster Kid falls from in the Neutral Route.

Ancient glyphs adorn the walls of Waterfall. The color palette of this region is primarily indigo and blue with the occasional black chasm. Mushrooms, Echo Flowers, gems within the walls, and water in some areas glow bright blue. True to its namesake, pools of water often provide the atmosphere at Waterfall, and the ceiling drips with water in some areas.

Exiting the waterfall room leads to the "Hallway", a room with a patch of tall grass in which a cutscene of Papyrus and Undyne takes place. Papyrus stands on the lighter side of the room while Undyne stands in the shadows. Undyne nearly attacks the protagonist but stops when she remembers that the sea-grass is used for scientific study.[4]

A few red gems and blue gems are in this room, along with three stalagmites near Undyne. After the protagonist exits the tall grass on the right, Monster Kid appears from the grass and celebrates seeing Undyne.

Initial Sea-Grass to The Wishing Room

After taking a few steps forward, the protagonist encounters Aaron. This encounter is scripted.

Along with four Bridge Seeds, this room contains four glowing mushrooms, a sign in the middle of a waterlogged area, a Bell Blossom that retrieves the seeds, and a sign describing the Bell Blossom. The sign in the bottom left of this room reads "Congratulations! You failed the puzzle!" The protagonist can solve the Bridge Seed puzzle multiple ways.

The protagonist can use the Bridge Seeds to create a bridge offscreen to the right of the room. In this room, there is an Echo Flower[5] and a bench with the Abandoned Quiche beneath it.

When the protagonist approaches the top left exit of the Bridge Seed room, Papyrus calls and inquires what the protagonist is wearing.[6] They are given a choice of whether to tell him the truth or lie to him.

The Wishing Room to Ferry Dock

The next room is the Wishing Room,[7] which contains many Echo Flowers and blue, glowing gems on the ceiling. As the protagonist progresses right, a telescope pointed at the ceiling offers a clue to check the northern wall to find the exit of the room.

The northern exit leads to a room with a wooden bridge and dark water in which many Water Sausages grow. On the north wall are many ancient glyphs. At the end of the wooden dock, the protagonist steps on a small raft that drifts to the right.

Undyne's first spear barrage occurs in the next room. The protagonist flees from Undyne's spears along a wooden dock surrounded by black water. Undyne stands to the north of the protagonist and directly behind a row of rock pillars. The protagonist escapes Undyne by hiding in tall sea-grass.

After leaving this room and coming back, a Ferry monster appears, and they can transport the protagonist back to the area after the Wishing Room, giving the protagonist 3G in the process rather than charging 3G.

Continuing right, the protagonist exits the room and sees Sans standing next to a telescope. To his right is another dimensional box. Sans attempts to prank the protagonist with the red-eye telescope. Exiting through the wooden door on the north wall of this room leads to another small room with the Nice Cream Guy in it. There is also a Punch Card box, a blue, glowing mushroom, and defiled ancient glyphs[8] in this room.

If the protagonist backtracks from this room and travels right from Sans's telescope, they encounter "Loren" and, continuing right, the small bird. The protagonist cannot use the small bird yet, as they are on opposite sides of a chasm of bright blue water.

Going south of where "Loren" is leads to a room that spans a large area horizontally and vertically. The color palette reverses in this room, and the water appears bright blue while the land appears black. As the protagonist traverses this room, they encounter a few Echo Flowers and can also find the Ballet Shoes in a tuft of tall grass.[9]

Before the protagonist crosses a wooden bridge, one of four possible dialogues can happen, depending on what the player chose to tell Papyrus in the second Bridge Seed puzzle room. If they told him the truth, Papyrus calls them again and explains that he told Undyne exactly what the protagonist told him because he assumed the protagonist would change their clothes after being asked such a suspicious question[10]. If they instead chose to lie, Papyrus gives one of two dialogues where he said he chose to lie about what they were wearing so they wouldn't get into trouble, accidentally telling Undyne what they actually are wearing.[11][12] If the protagonist told him the truth, but they have changed their defensive item, Papyrus says that he made up what they were wearing, accidentally guessing what they changed into[13].

Continuing, the protagonist enters a long, horizontal room with a narrow black path leading to the right. As they progress down this path, Onionsan appears and talks to them. The protagonist then leaves through the right exit and encounters Shyren in the next room.

Shyren's room has two small, white waterfalls that flow from the top to the bottom of the screen and always stay in the foreground. To the north of this room, the Piano Puzzle awaits the protagonist. The protagonist opens the door to the Artifact Room by playing the melody that echoes through the area.[14]

The Artifact Room itself contains a red orb on a pedestal and glyphs that cannot be read because the protagonist cannot stand directly in front of them.

Backtracking and heading to the right from the room with Shyren's battle, the protagonist encounters more ancient glyphs that inform them of Boss Monsters.[15] Continuing to the right, they see an ancient statue that has water dripping on it from the ceiling.

Exiting this room through the right exit leads the protagonist to a room with a white waterfall in the foreground, a bucket of umbrellas, and a sign encouraging them to take an umbrella. Progressing right, they walk through a waterlogged room that has many waterfalls and reflective pools within it. Monster Kid walks alongside the protagonist for the duration of this room.

After the duo reaches the end of this room, they enter a two-dimensional room with New Home off in the distance. The game returns to an overworld scheme after the protagonist exits this room to the right.

The next SAVE Point is in the room immediately to the right of the ledge, known as the "Bridge". There are also more ancient glyphs on the walls that detail The War of Humans and Monsters. Exiting this room to the right, the protagonist walks on another wooden bridge where Undyne antagonizes them. After reaching a dead end of the bridge, the protagonist falls into the Garbage Dump after Undyne slices the bridge in two.

Exiting this room leads to a vertical room with more piles of garbage as well as a cooler with two packs of Astronaut Food. Mad Dummy is fought in this room, and Napstablook interrupts the battle. Napstablook then invites the protagonist to their house.

To the west of the “Quiet Area” lies the small bird that can carry the protagonist over a disproportionately small gap to the earlier areas of Waterfall. To the east lies a crossroads with Gerson's shop to the north and a southern path that leads to a room where the River Person is present once the protagonist reaches Hotland. A Dimensional Box is present next to the entrance to Gerson's shop. Continuing east leads to a horizontal room with two bodies of water that the protagonist sinks their legs under. This is the first room where Temmie and Moldbygg can be encountered. There are Echo Flowers in this room,[18] but they are inaccessible to the protagonist.

Continuing forward, the protagonist enters a maze of paths that light up when they touch the glowing mushrooms. There is a southern path that is hidden from view that leads to Temmie Village but lights up once the protagonist leaves the village. The next room is another maze, but this time, there are darkening lanterns that must be turned back on to temporarily light the way forward.

After solving the two puzzles, the protagonist enters a horizontal room that gets progressively darker as they continue forward. Interacting with the Echo Flower at the end of the room causes the room to light up only for Undyne to appear and approach the protagonist with the intention of taking their SOUL. Monster Kid suddenly jumps out from a patch of tall grass and interrupts the ensuing battle. After Undyne drags Monster Kid away, a path that was previously hidden from view lights up, allowing the protagonist to continue north into a vertical room with a few Echo Flowers along the path. There is an ancient glyph at the end of this room that mentions a prophecy of an Angel returning from the Surface and causing the Underground to go empty.

The protagonist then enters a room that contains a bridge spanning across an expansive chasm. Monster Kid approaches the protagonist and talks to them. However, once they start to leave, they trip off the bridge and hang onto the ledge below just as Undyne enters the room. The protagonist has the option to save Monster Kid, confront Undyne, let Monster Kid fall off the ledge, or run away into the next room where the Elder Puzzler eventually inhabits.

In the “Undyne Arena”, Undyne stands atop a tall crag and speaks to the protagonist, with her dialogue changing based on if they killed monsters or if they killed Papyrus. She eventually allows the protagonist to prepare themself however they want, initiating the battle once they step forward. If the protagonist opts to flee from her, Undyne begins chasing them throughout the last two rooms of Waterfall before Hotland, reengaging battle if she catches up with them.

Going under the crag that Undyne originally stood on leads to a vertical room that acts as a bridge over a river. The ice thrown by Ice Wolf flows along this river. The next room is a horizontal room with a neon sign saying “WELCOME TO HOTLAND!” with the letters scrolling across the sign. If Undyne is killed, the neon sign is turned off. Papyrus calls the protagonist in the neon sign room telling them that they should hang out together with Undyne sometime.[19] If Undyne is chasing the protagonist, she stops so that they can accept the call.[20] 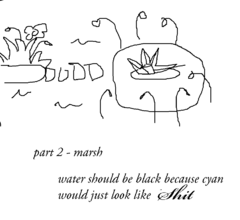 The concept art of Waterfall 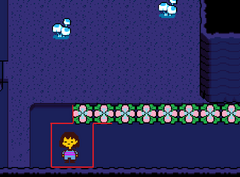 The Bridge Seed glitch where the protagonist can walk on the water. This glitch has since been patched.