Fighting For The Future

The Long Battle Finally Ending...
Whimsalot (/ˈhwɪmzələt, -ˌlɒt/) is an enemy found in the CORE and an advanced version of Whimsun. It also appears in the Ruins when in Hard Mode.

Whimsalot has more human-like appearance than Whimsun. In addition, its antennae are thicker, and there is muff on their head that branches in two. Whimsalot's appearance is also accompanied by a double-bladed spear and a knight mask. Its ghost-like torso is skinnier and shorter. 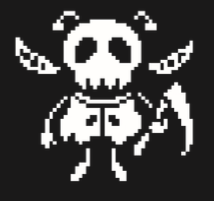 Whimsalot original concept design. Here they had a skull-like face and a scythe.